Looker persistent derived tables (PDTs) provide the ultimate data modeling flexibility. They put robust data transformation capability into the hands of analysts and data modelers by enabling them to use LookML to write materialized query results back to the database. This means performant reporting based on complex analytical patterns behind the scenes (think cohorting, retention, user behavior patterns, etc.) can be in the hands of users faster.

However, as our customers have leaned into the magic of PDTs, some have run into challenges with scalability. Monitoring and managing PDTs that refresh on varying schedules becomes exponentially more complex as the number of PDTs grows. As a solution to this, we are thrilled to share that we have released a new integration with Apache Airflow that is now also available in Cloud Composer, Google’s managed workflow orchestration service built on Apache Airflow. This new integration provides a pathway for our customers to scale their PDT usage through external data orchestration alongside other ETL and ELT processes. Read on for details on how you can get started.

In order to take advantage of this new integration, you will need to be using the following versions of Looker and Airflow:

This integration uses the Looker SDK to connect Looker and Airflow. The SDK will call the Looker API 4.0 using your API credentials. To learn more about authenticating with the Looker API, check out our documentation.

Setting Up Your Connection

Because this integration will leverage Looker’s new functionality for managing PDTs externally via API, you’ll need to ensure that the toggle called Enable PDT API Control is turned on within your connection settings. If you have more than one connection, you’ll need to enable this for all connections with PDTs that will be managed using Airflow.

Once you have enabled PDT API control in Looker, you’ll need to set up your Looker connection within Apache Airflow or Cloud Composer. 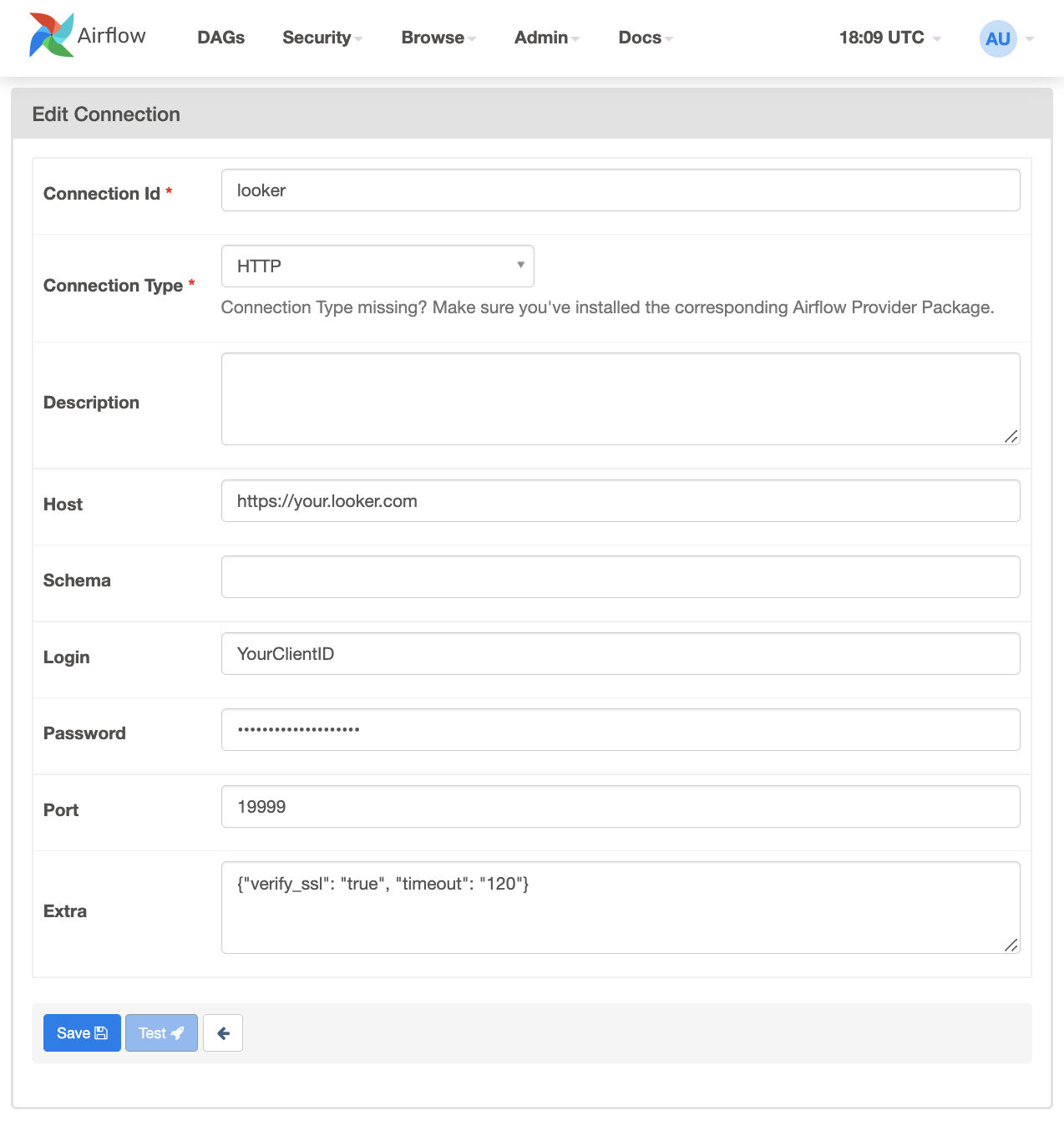 Here’s a brief overview of the parameters available and recommended settings for each:

For more information on these settings, see the Looker API path and port section of Looker’s documentation. To generate your API login (ClientID) and password (ClientSecret), you’ll need to do the following:

There are some additional optional parameters that can be set using JSON format within the Extra section. These include:

Please note that there isn’t an associated test_connection hook for this connection type, so the Test Connection button will not work. The best way to test your connection is to create and trigger a simple DAG.

1. Enable Secret Manager in your project.

2. Ensure that the Service Account used by Cloud Composer has the proper permissions.

3. Set secrets/backend Airflow configuration override to indicate that Secret Manager will be used for secrets.

4. Create a Secret following this naming pattern and Value following URI representation (this is where you will pass in your Looker instance and connection details).

In Airflow, a DAG – or a Directed Acyclic Graph – is a collection of all the tasks you want to run, organized in a way that reflects their relationships and dependencies. Once you have set up your connection to Looker, you’re ready to create a DAG for PDTs. To do this, you should follow the same steps that you would for any other DAG you might create in Airflow. An example DAG can be found at the end of this article.

Each task in your DAG will be responsible for specific PDT builds using two new Looker Operators:

Using these operators, there are two different types of tasks that you might create: synchronous and asynchronous. Let’s take a closer look at how each would be set up.

Synchronous mode is the default mode for tasks. In synchronous tasks, the LookerStartPdtBuildOperator is used to both start the task and check its status, so it is the only operator that you will need to use inside your PDT build task.

To use this operator, you simply need to provide the model name and view name for the PDT that you want to build. These are the only required parameters, but are a few additional optional parameters that you can include:

And here’s what this would look like within Airflow:

Once started, the build task will block DAG execution until the build is finished, meaning that the task will run until it succeeds, errors, or is canceled.

In asynchronous mode, a PDT build task is separated into start and status tasks. Using asynchronous mode and separating the start and status tasks in this way can be useful when submitting long-running PDT build jobs. The LookerStartPdtBuildOperator is used to start the build task and should be set up as outlined above. The only difference is that you’ll include the following additional parameter within the task:

You will then need to include a separate Airflow sensor, which can be created using the LookerCheckPdtBuildSensor operator. This operator is a custom sensor task that can be used to check the status of a PDT build. When the DAG is executing, the start task will finish immediately and pass execution over to the status task.

The only required parameter for the LookerCheckPdtBuildSensor is the materialization_id for the PDT build job, which is an output of the start task. You can also, optionally, include a custom poke_interval, which sets the interval for checking the status of the job (in seconds). The default poke_interval is 60 seconds (1 minute).

Within Airflow, you would chain these tasks together and specify the relationship between them within your DAG:

Here’s how your DAG would be represented in Airflow:

Just like with synchronous mode, once running, the status task will block DAG execution until the build is finished, meaning that the task will run until it succeeds, errors, or is canceled.

Both the LookerStartPdtBuildOperator and the LookerCheckPdtBuildSensor support PDT build cancellation. This does not require a separate operator. Either type of task can be canceled by manually marking a task as Failed or Success in Airflow. 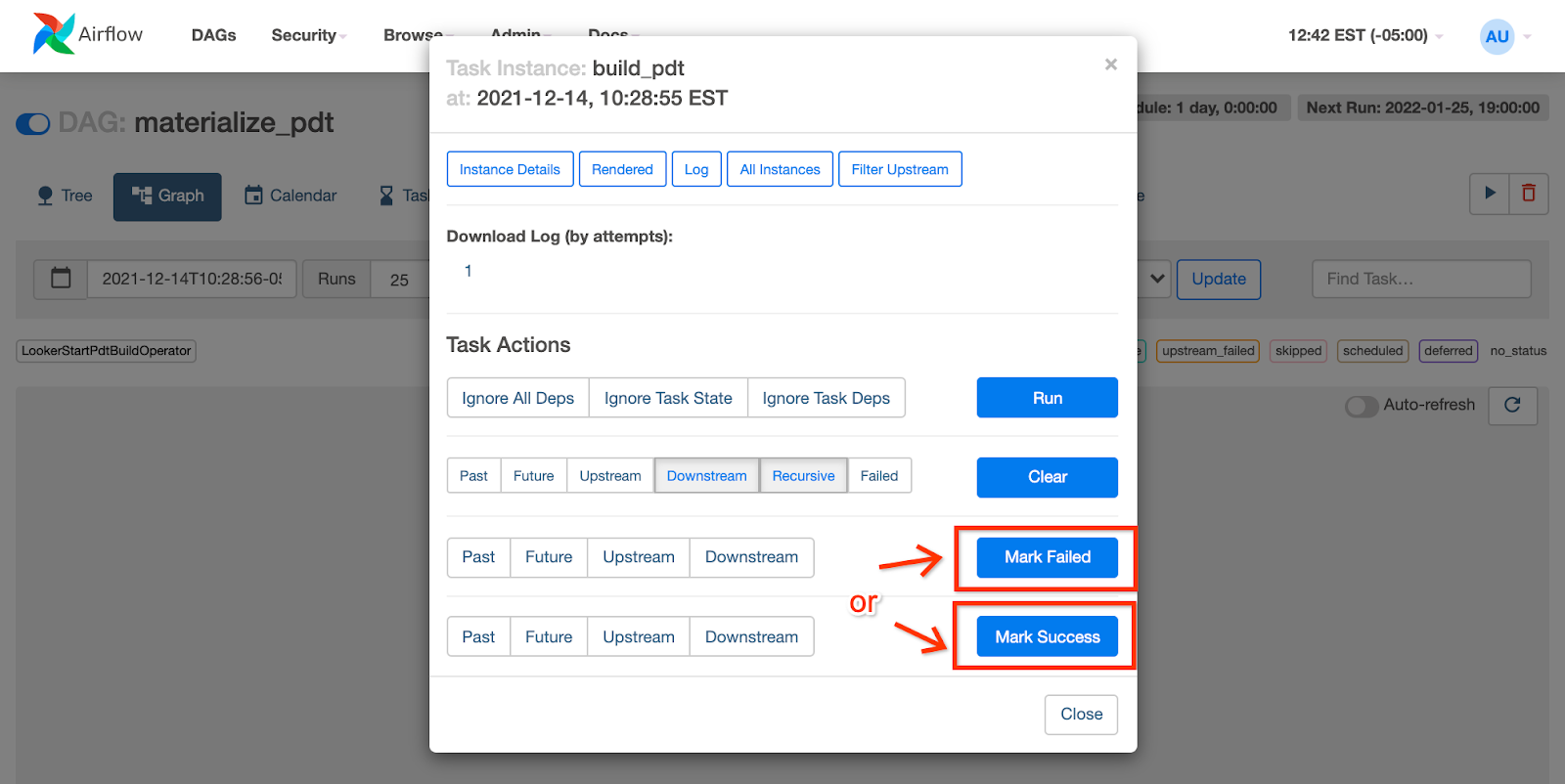 Manually marking a task as Failed or Success will trigger an API call back to Looker to cancel the build. This will result in the cancellation of the PDT materialization in Looker and within your database (if supported).

​This new integration with Apache Airflow creates a pathway for scaling PDT management and maintenance. Not only can you implement automated processes to govern PDT rebuilds, but you can also orchestrate these data transformations alongside your other ETL and ELT workflows.

These new operators will also be made available within Cloud Composer, Google Cloud’s managed workflow orchestration solution built on top of Apache Airflow, so watch out for more information on that in the coming weeks.

I’ve been trying to setup a pipeline in order to trigger a PDT Build using the `LookerStartPdtBuildOperator` without any luck. The error reported in the logs isn’t useful either.

The error I get is:

shot in the dark, but are you sure the derived table you’re targeting has a persistence strategy defined? If it’s not a persistent derived table, that’s the (unhelpful) error you get.